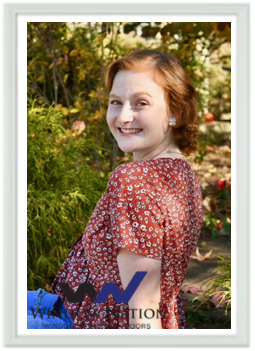 Summit of Wisp at 3,000 Ft. elevation in McHenry to Cumberland.

We first got the see Natalie in person on Maryland Trek 6, when our team arrived in Baker Park. She had been in the hospital for 60 days, and then waited a few extra hours while we were delayed in a thunderstorm.

I remember racing to the car window and seeing this sweet face.  Then as the entire team rolled up behind me, the typical teenager blushed allowing all of the color to return to her face.

She popped out of the car to meet the team, and I my heart burst with joy!

Natalie graduated High School. I shared this photo on my Facebook page where tens of thousands fell in love!  We were so happy with her progress. 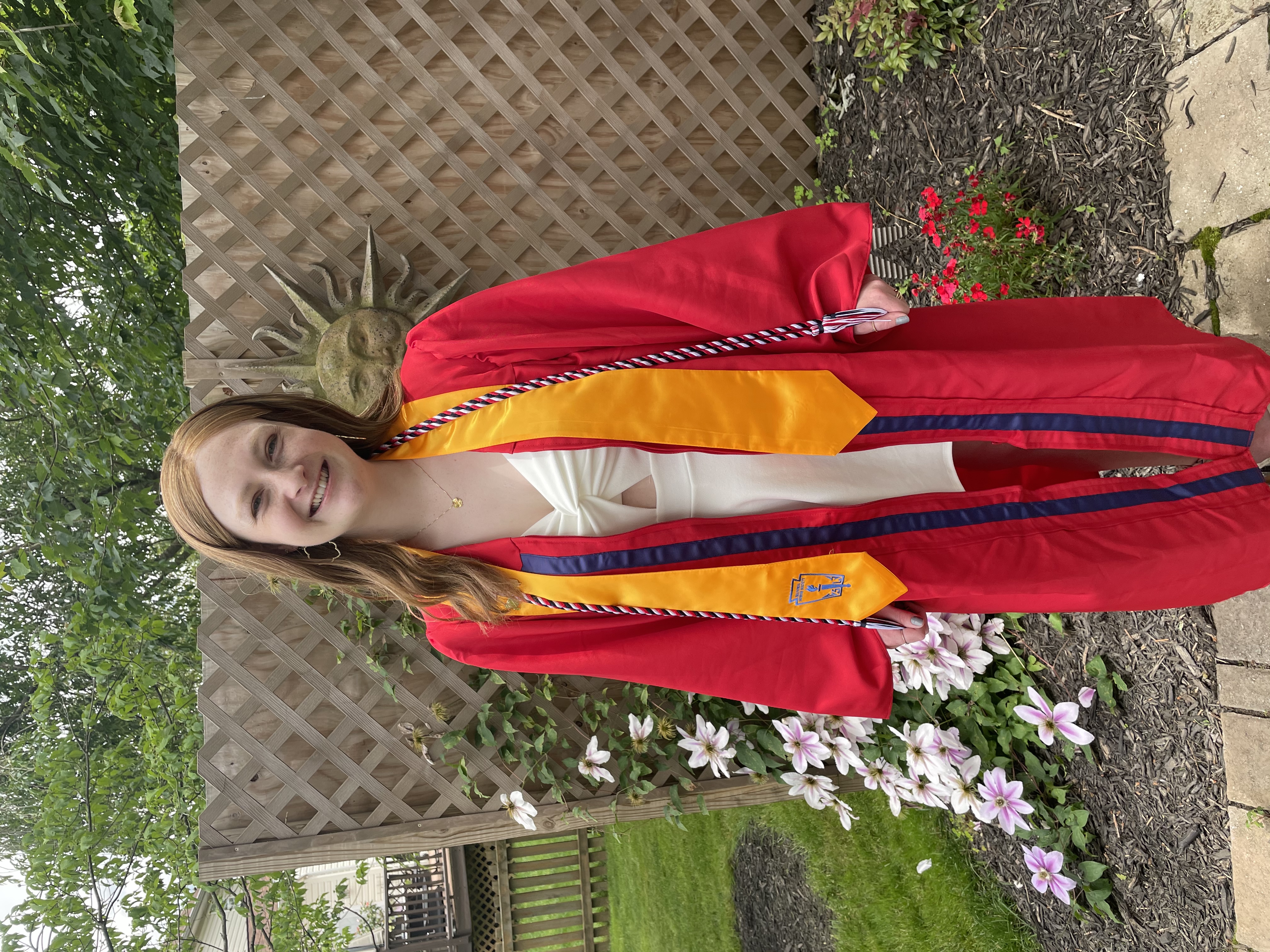 Shannon sent her a cake and gift basket on behalf of Just In Power Kids, and Natalie was so gracious thanking us.  Such maturity for a young woman, I had to race out to Frederick again, this time to hand her the Day Sign our team signed on the trek.   I got to meet with her parents as well, as they were packing the car for a girls Senior Week trip to Ocean City. 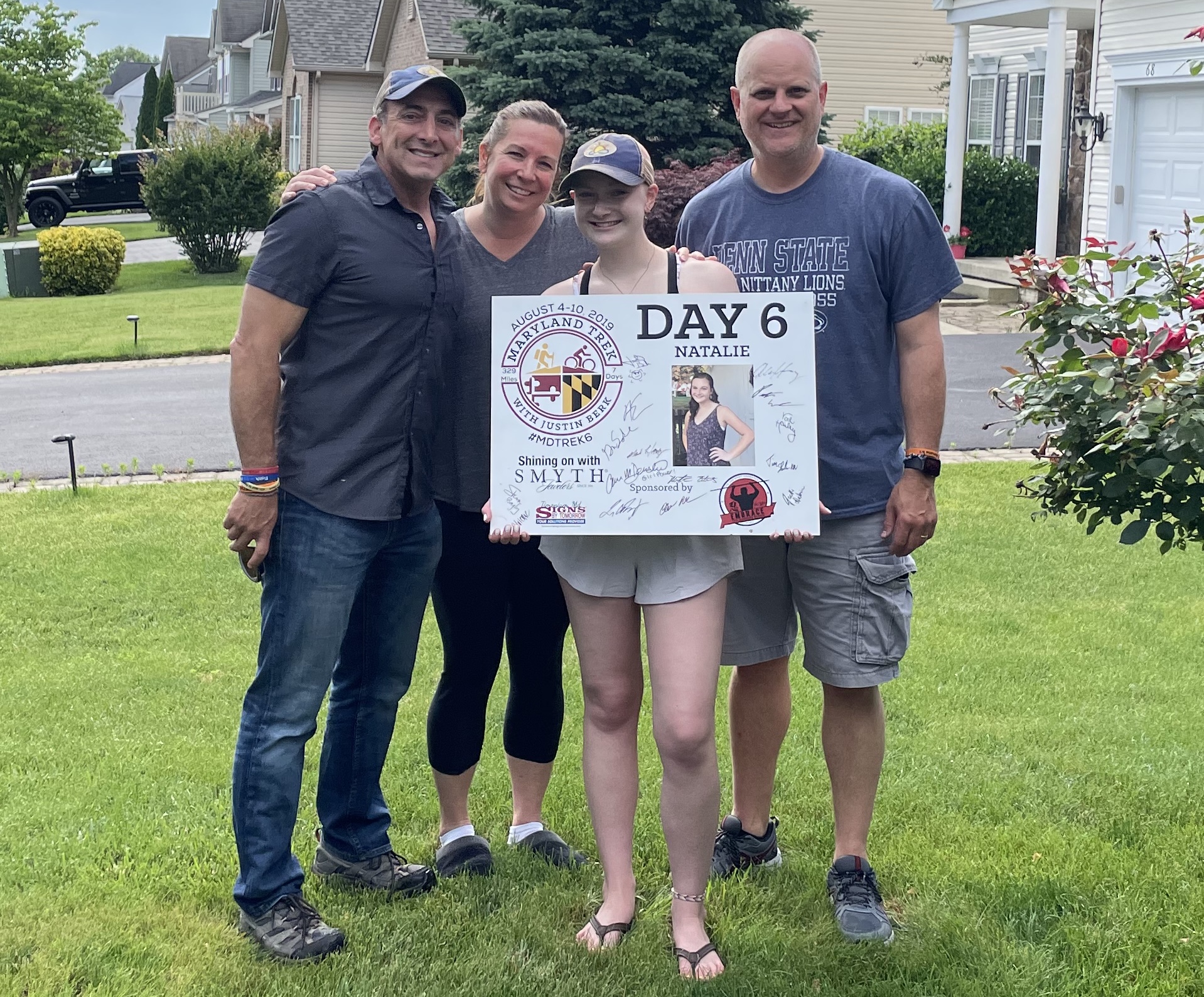 Since then, her number's came back and she is now back in chemo.  It has been a twist none of us wanted, but she is meeting it head on!

We have sent more supplies to help alleviate some of the pain, fatigue, and nausea.

This year we honor Natalie on Day 1, and have a softball along with us that the team is going to sign. She is with us on this journey and we want her back playing ball again.

In 2015, after having strep throat and the medications not working, Natalie’s doctor suggested getting some blood work done to look at it a little further. She was taken to the hospital and while there, Natalie got a chest X-ray which was negative, but also got more blood tests that concerned FMH. They wanted Natalie in a children's hospital to get more tests done because they suspected something serious.

The doctors told her mom that she needed to select a hemoglobin oncologist… WHAT?

She selected University of Maryland Hospital.  Her unbelievably positive attitude began immediately! One of the main results of the tests was that Natalie's blood platelet counts were very low. She then got a red blood cell transfusion because of her counts. She experienced a rash from these transfusions and had to be pumped with Benadryl.  She was diagnosed with leukemia. Natalie and her family had their lives changed forever.

Acute Lymphoblastic Leukemia (ALL), which is the most common type found in children Natalie's age with a 80%-90% success rate in recovery.

Natalie had the most unbelievable positive attitude and will to live as she took on anything she needed to to handle the plan for eradicating the cancer. She was stronger through all of this than most grown adults. She went through treatments with grace and strength and even had some spotlight moments of returning to her sports teams and making some insane plays after ending treatment. She looked as if she had conquered the battle and was smarter and wiser for it.

To everyone’s greatest sorrow the cancer returned in december of 2018. A punch to the gut in seeing this happen yet again after so much energy and pain was had going through the first round… her mom was quoted as

Saying : "The good thing is that we know what to expect, but the bad thing is that we know what to expect."  It would be a long arduous journey once again.  Since 2018, she went through a CAR-T trial in Seattle in June 2020. She spent the summer going back and forth between Maryland and Seattle for the trial. This was to help fight off leukemia lesions that were still present in her body even though she had no cells in her bone marrow. At first the trial was going well but Natalie's body ended up rejecting the process. She had bone lesions and biopsies and more treatment but still no leukemia in the bone marrow. After investigating other trials at NIH, it was found she wasn't a candidate because she had a tumor wrapped around the base of her spinal cord. In March 2021 went back in for her second bone marrow transplant. By June 2021 Natalie had many ups and downs as she graduated from high school and was accepted into Kutztown University but by the next month the leukemia was back. The roller coaster continues and she currently is undergoing yet another round of chemo and still trying to make the most of her time.  Follow her journey on caringbridge under Natalie McMaster.

I was diagnosed the first time, July 10, 2015, a week before I was going to my softball world series in Ocean City, Maryland with Acute Lymphoblastic Leukemia (ALL). At first this all came to me as a shock, I had no idea what “Leukemia” was and I was upset when I started seeing comments on social media saying I had cancer. I thought they were lying and I was frustrated because I thought the doctors weren’t telling me everything, but they came in a little later and told me Leukemia was a type of blood cancer.

The next few months were very rough on my body and emotions, I was constantly in and out of the hospital and unable to start my 7th grade year. Finally for the first time in about 4 months I got to hear some exciting news, I was cancer free on November 6th. I was lucky enough to be feeling well enough to start back with winter conditioning workouts by November 17th, 2015. Sticking with softball and with my softball family made this whole journey a bit easier.

I relapsed, December 27, 2018, the same leukemia came back. I was completely devastated. I was thinking why did I have to get cancer a second time. I spent most of January 2019 in the hospital. I was missing the second half of my sophomore year. In February, my doctors presented me with an option to go on a study for a new drug that was proving to show positive results and eliminate the cancer cells. I opted to go on the study and I was chosen to get the new drug. This made my spring so much better than I thought. I was able to participate with my high school softball team, Governor Thomas Johnson High for the entire season.

This summer I have just received a bone marrow transplant and am hoping that these new cells will keep the cancer away so I do not have to go through this ever again.

This opportunity made me realize that even though I was diagnosed with a heart crushing disease, there will always be good things that come out of it. It could always be worse. During this whole journey I had so many generous and loving supporters by my side, there was never a day I ever felt alone while fighting this. I hope everyone going through something like this will always stay positive.